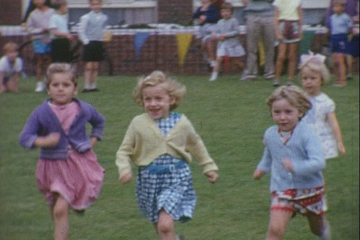 Summary: Compilation of four amateur films showing activities of the residents of the Brandon Estate, Southwark.

Description: The colour opening title reads: 'B.E.C.C. presents'. [00:14] Black and white film opens with a street sign reads: L.C.C. - Brandon Estate Housing Site. Shot of the tower block and grounds. Children play on the grounds. The camera follows one boy as he crosses the grounds, vaults a low fence, crosses the road and walks into another part of the estate. Shot of the courtyard in front of the library, then a plaque that reads: 'Brandon Library, opened by Lord Morrison of Lambeth 24th September 1960'. Interior shots of the library.

[4:06] Sports Day 1962 (colour): From a high position, the camera pans across the estate, from the tall tower block to the lower builings. A man hammers poles into the ground that will mark out the race course. Small children set off on a practice run. The film consists of many running races, starting with the smallest children, who receive a packet of Smarties, and ending with races by the older children, including an egg-and-spoon race. Interspersed with the races are close-ups of faces in the crowd and mid-shots of the onlookers cheering from the sidelines.

[9:58] The Baby Show (colour): Close-ups of babies sitting on their mothers' laps before the show starts. Then, four mothers holding numbers sit in the front row of chairs to be judged. The film ends with close-ups of the winning babies and their mothers.