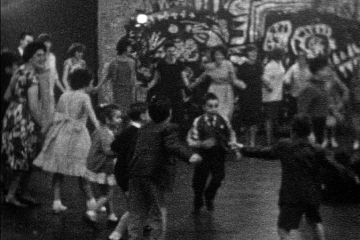 Summary: A compilation of three amateur films showing activities of the residents of the Brandon Estate, Southwark.

Description: [00:00] Cine Club Outing, Stratford on Avon 1962: People get on a coach. They get off and go into a public bar. They arrive at Stratford-upon-Avon. Shots of the Avon, a church spire, the Riverside Hotel. The coach party eats in a restaurant. Shot of the Royal Shakespeare Company's sign. Three children canoe on the Avon. Shots of street signs, Tudor-period buildings, a swan, a little girl smelling flowers in park. [Note: The title screen and opening frames of this film appear on LSA/1488, not on this reel.]

[03:25] Title: 'Cambridgeshire Dance 1961 with Nicholas Parsons': Couples dance as a small band plays on the stage. Close-up of two women jiving. Nicholas Parsons looks on, then is introduced and comes on stage. He jokes with the crowd, pointing to individuals and making big gestures. He draws the raffle numbers. Many close-ups of women in the crowd during the raffle draw. It ends with a circle dance that includes children. The event' poster reads: "Flash" Personal Appearance of Nicholas Parsons (of Famous 'Arthur Haynes Show') at Our Cambridgeshire Draw-Dance, Saturday 21 October, 2/-, 8-45.

[07:33] In a hall, long tables are set with plates and cutlery. At one table, women prepare sandwiches. Children arrive and sit at the tables. The adults serving them wear party hats. Many close-ups of the children eating and drinking.

Further information: The Brandon Estate was built in 1958 and housed people from Bermondsey whose houses had been demolished in slum clearance. The residents formed several clubs, and the cine club filmed events run by the social club, which met above the library.