What Future for Haringey? 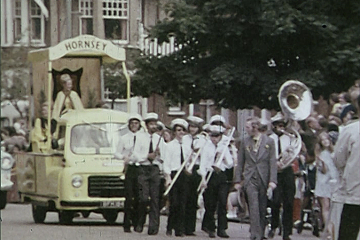 Description: A film made as a preface to the Haringey Borough Plan of 1974, seeking rates payers opinions on the use of council cash and land. It begins by posing the question 'what is Haringey?' and using archival images from Bruce Castle Museum, maps and modern film footage shows how a primarily rural area developed into a busy urban settlement. It then turns to the questions of 'what will Haringey become? What can it?' and the role of the council in directing the Borough's future. A meeting of the council's Development Control panel is seen in progress discussing current pressing issues. Three members of council staff introduce some of the Borough's longer lasting concerns. Alex Henney, the Housing Co-ordinator of Haringey Council talks about the accommodation issues, rising house prices and falling availability of rental property. His overview is supported by comment from two local resident. Janice, a secretarial worker, lives with five other people in an unfurnished rental flat. She has looked into getting a GLC mortgage, but the price of property makes a purchase unaffordable. Janice Colledge, a young mother made homeless after leaving her violent partner talks about the health problems affecting her child since living in temporary accommodation. Peter Smith from the Central Area Team of Haringey Council introduces the planned redevelopment of Wood Green shopping centre and the benefits it will provide to the community. Sydney Roper from the Planning Department of Haringey Council talks about the provision of parks in the Borough and their uneven distribution. Other issues discussed in the film include schools, traffic, facilities for children, the changing pattern of employment and the link between poverty and mental health problems. Throughout the film there are views of locations discussed. From Tottenham Hotspur Football Club's stadium White Hart Lane, to Alexandra Palace, the grids of Tottenham's terrace housing, Highgate Village, Crouch End Broadway, Hornsey Town Hall, the empty site of Harry Sleepers, Wood Green and Finsbury Park tube stations, Turnpike Lane, Muswell Hill Broadway, and Ward's Corner in Seven Sisters. Workers from Barratt sweet factory talk about the effect on local employment of its closure. Bus drivers from Tottenham Garage talk about the Borough's public transport problems. Teachers from Noel Park Primary, Coleridge School and Broadwater Farm School speak about the overcrowding they face. John Wilder of the Psychiatric Rehabilitation Association pushes for more projects like the Mitchley Hall Workshop providing self-help facilities for those who have suffered with their mental health. John Wratten of the Tottenham Community Project introduces its work, its Community Shop, newspapers and the 'Tottenham Bus'. Ruth Serner of the Stroud Green Community Association speaks about how best to influence councillors. The film is keen to show that there are no easy solutions, that compromises of one sort of another must be made, and that ratepayers should play their part in directing their political servants.

Further information: The music for the film is played by a group consisting of Chris Harding on organ, John Sanderson on reeds, Mick Wheat on bass, David Van Gelderen on guitar and Dave Sayers on tablas.

In galleries: 50 Years of the London Boroughs