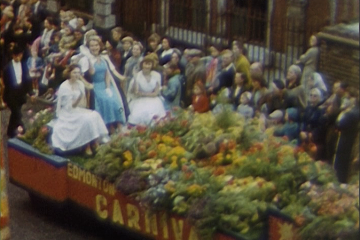 Description: The Charter celebrations begin at a fair in Jubilee Park, where children ride on the fun fair amusements and people eat toffee apples. There is also a miniature golf tournament and some children's shows. A comedian makes balloon animals for children, clowns around and plays practical jokes while a woman plays piano. The celebrations continue with the Carnival parade from Snells Park to Jubilee Park (via Upper Fore Street, Angel Corner, Lower Fore Street, New Road, Hertford Road and Bridlington Road). The Charter Mayor, Councillor A.J. Tanner, and the Mayoress visit some of the parade floats including those of the Edmonton boy scouts, Fremlins Brewery, Spratt's dog food, the co-operative society, the Regal Theatre, Gordon's Gin, the British Red Cross Society. Mac Fisheries, Edmonton League of Hospital friends, Tufnell Park boys, Players cigarettes, Granada, and beauty queens from coastal resorts including Clacton-On-Sea, Ramsgate and the Isle of Sheppey. The parade is led by a marching band, followed by the Mayor's cars and the carnival floats. A swimming and aqua show at an open air pool includes swimming races, use of a water slide, and use of scuba apparatus. An American tennis tournament on a clay court features doubles matches. A bowls tournament - men playing bowls. The 7th Battalion of the Middlesex Regiment (the Duke of Cambridge's own) demonstrate the use of a machine gun and display medals and trophies. Fun fair rides from T. Holland's Amusements of Poplar include swings, a merry go round, a coconut shy, game stalls, a balloon seller, a miniature train roundabout and pony rides. Also at the fair there is open air dancing to jazz band 'Joe Hart and his Music'. The Mayor awards prizes and trophies. The gala show at the fair begins with a marching band and continues with performances by 'The Sensational Diavolos', acrobats who enact an aerial display on a high pole and wires, Roy Franson's 'Dive of Death', a man leaping from height while set on fire into a pool of water, and a formation driving display by the Army Training School motor cycle display team. After dark, the fun fair continues under electric light and the public enjoy a fireworks display.