A Borough is Born (part II) 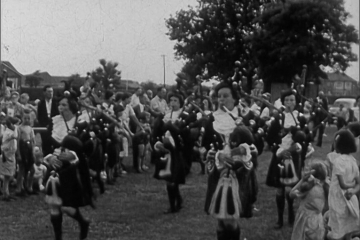 Description: The film begins at the public offices of the Urban District Council of Enfield where councillors are drafting a petition to the Queen requesting a Charter of Incorporation as a Municipal Borough. In the next sequence, the work of the Councillors on the incorporation sub-committee is introduced. The 23rd May 1953 sees the first meeting of the new Borough Council in the new hall of the County School. The Chairman of the former Urban District Council, Councillor A M Beales, opens the meeting and calls for nominations for the office of Enfield's first Mayor. Councillor J. Cottenham is voted in and the meeting is adjourned. The meeting recommences under the chair of the new Mayor. Votes for Aldermen for the Borough's wards are then held. Afterwards, the new Mayor hosts a short reception and civic luncheon. The film continues with footage of the Borough mace and the Mayor's badge and Chain of office being constructed at a London jeweller, and a discussion of their symbolic details. The new Coat of Arms is also discussed. Solicitors of the Borough present the Town Clerk's wig and gown. The 1951 general election in the UK is seen through the lens of Enfield with views of voting at a polling station in the Borough. Conservative candidate Iain Macleod is filmed campaigning before his election victory for Enfield West. At the offices of the Enfield Labour Party on Silver Street, their candidate Mr WA Court is shown about to make a tour of the polling stations. Labour winner of the seat for Enfield East Mr Ernest Davies is filmed at a polling station. His Conservative competitor, Jim Manning is filmed talking to local traders. The film then moves on to some of the civic entertainments put on by the Council including performances by the Arab Legion Band and the Dagenham Girl Pipers and a children's folk song and dance festival held in Enfield Football Ground in Southbury Road. The Yugoslav Minister for Finance comes to Enfield and visits the Mayors Parlour, the printing works of the Enfield Gazette, and the Carter Hatch Junior School. The Mayor opens the Enfield Show in the Town Park; the show is under canvas with hobbies and handicrafts of the town displayed in marquees. Charter Day on September 27th 1955 begins with a parade through town by contingents of the Borough's youth, and other organisations. They march along Church Street to the square at the Market Place. Meanwhile at the Borough boundary on the High Street at Ponders End the Mayor and Mayoress, the Town Clerk and the Mace meet the Lord Mayor of London Sir Seymour Howard, the Lady Mayoress and their party, as well as Charles Latham, the Lord Lieutenant of Middlesex. The Lord Mayor's coach then leads a procession into the town, travelling along the Hertford Road, down Southbury Road passing rows of factory personnel, and over the junction of the Great Cambridge Road. Large crowds greet the party of officials, with people lining the streets, leaning from windows and occupying the balcony of the George Hotel. At the market square, Sheriffs and the City Marshall join the Mayors. The Parish Church of St Andrew rings its bells in celebration. A Guard of Honour is supplied by men of the Middlesex Regiment (the Duke of Cambridge's Own), and music is presented by the Band of the 7th Battalion of that Regiment and by members of the Royal Military School of Music. The Lord Mayor and the Lord Lieutenant inspect the guard, pausing to speak to some men. The officials then move inside the Rialto cinema for the presentation ceremony. It begins with an address of welcome to the Lord Mayor. The Lord Mayor then formally presents the Royal Charter of Incorporation making Enfield a Municipal Borough and the Mayor accepts the document. After the ceremony, the officials relax in the cinema foyer, taking a break before the civic charter luncheon in the Great Hall of Enfield Grammar School. After lunch the Lord Mayor and his party visit Church of St Andrew and then take their procession on to Forty Hall at Forty Hill. At Forty Hall the Lord mayor meets children and opens an exhibition of Enfield art and history. On the lawns on south side of Forty Hall he watches maypole dancing by Enfield children. After another meal the Lord Mayor departs for the Mansion House. The film continues with some of the Charter Week celebrations. Old people are transported to Merry Hill School for a celebration tea and meal. The Charter Exhibition at Forty Hall presents historical and archival documents to the public. A Charter Ball including a cabaret thanking donors of artefacts to the Mayors Parlour. A public event takes place on Enfield playing fields, where the celebrations include butchers roasting a whole ox and a show jumping competition put on by the Enfield & District Horse Society. At night the celebrations continue with fun fair rides under electric light. The film ends with a fireworks display.

Further information: A note in the can explains: 'Part I loaned many years ago to Town Clerk's department and never returned'.