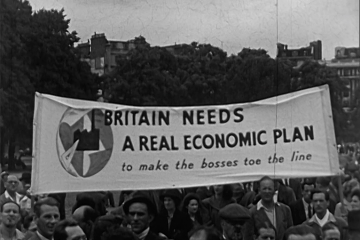 Summary: A filmed record of the British Communist Party hustings in Bexley and Hyde Park. The candidate for Bexley, Charles Job, is seen delegating with colleagues and campaigning in the local area. Evocative scenes of Bellegrove Road, Welling, offer a revealing insight into everyday life in the borough. Several party speakers address a large crowd in Hyde Park.

Description: The film begins in a suburban area where a man and boy are fly posting election posters using a bucket of paste and a broom. The posters read 'Bexley Borough Council Election/Wednesday 1st November 1950/Polling 8am to 9pm/St Michael's Ward/Vote for Job/Your Communist Candidate'. Members of the Communist Party are filmed campaigning in Welling during the election, including shots of men outside Barclays Bank on Welling Corner at the junction of Bellegrove Road and Upper Wickham Lane (also visible is the shop A.B. Hemmings). The same men are photographed closer up from the opposite side; a woman speaks with some of the men and they seem to be holding some campaign materials (visible in the background is a shop called Bayfields). The men cycle off northwards along East Wickham Lane, on which trolleybuses and other traffic are proceeding. Some of the men are filmed campaigning door to door in a suburban area, including conversations with residents on their doorsteps. Shots of a busy Bellegrove Road looking westwards from Welling Corner include pedestrians, cyclists and a political campaign car with a loudspeaker mounted on the roof. A close-up of a handwritten sign which reads 'Here/Welling Library/Now/Saturday October 28th/3 o'clock/Public Meeting!/Charles Job/Communist Candidate/St Michael's Ward/Communist Policy/For/Bexley/Bexley Council Election/November 1st'. Shots inside the meeting show a mixed group of adults sat on chairs watching a male speaker, followed by shots of Communist Party leaflets on a side table. A group of men and women are filmed talking on a residential street; the house behind has an election poster for Charles Job in the window (it may possibly be Mr Job's house and Mr Job one of the men filmed). The film concludes with film of a Communist rally in Hyde Park with a large crowd of supporters addressed by Communist Party of Great Britain General Secretary Harry Pollitt and others. Pro communism banners in the crowd read 'Communist Party', 'Put Men Into Government Who Will Stand Up To The Yanks', 'The Communist Party Fights for Britain', 'Join the Communist Party Now/The Workers Will Save Britain', 'Slash Profits, Reduce Prices', 'Britain Needs a Real Economic Plan to make the bosses toe the line', 'Break the Dollar Grip', 'Put the Idlers to Work', 'More Workers in Key Posts', 'Building Socialism Through The Daily Worker', 'The Amalgamated Society of Woodworkers', and 'Communist Party/Borough'.

Further information: In the 1950 Bexley Borough Council Election the Conservative Party took control of the council from Labour. The Communist party candidate for Bexley, Mr Charles Job, had stood in the general election as a parliamentary candidate earlier in the year and had received 481 votes, more than the 133 vote majority won by incumbent Conservative Party MP Edward Heath. Mr Heath would reputedly toast Mr Job at subsequent events for saving him from defeat by the Labour Party. Mr Job was an electrical fitter and a shop steward at Deptford East Power Station as well as being the Chairman of Bexley Communist Party. He was reputedly a popular lecturer on social, economic and political subjects and wrote the pamphlet 'London's Arsenal', a celebration of trade union activism at the Royal Arsenal in Woolwich. In the pamphlet he wrote that 'In the future the manufacture of arms and munitions should be taken entirely out of the hands of private ownership... the profit motive should be entirely removed from the manufacture of war equipment'. The pamphlet includes a postscript lamenting the laying off of workers in late 1945.