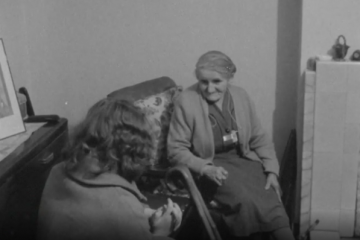 Summary: This short film shows activities of the Women's Voluntary Service, in the 1960s. Watch as the volunteers load the van and deliver hot meals to an elderly couple, or provide much needed company and conversation to another lady.

Description: The Women's Voluntary Service, founded in 1938 to help with wartime problems of evacuation, air raids and rationing, had evolved by the early 1960s to helping isolated and lonely people, in particular the elderly, hence their efforts to provide 'meals on wheels.' After an opening shot of two vans, we see two middle-aged women in coats and skirts with a large metal box on wheels, struggling to lift it into the back of a van. The side of the van carries the WVS: Civil Defence logo topped with a crown (Queen Elizabeth II had been a patron since 1956; the WVS would become the Women's Royal Voluntary Service in 1966). The women stop the van and enter a terraced house; inside, an elderly man and woman sit in their living room and enjoy a hot meal. The elderly woman wears dark cat-eye glasses and a floral apron.; the house has garish patterned wallpaper. One of the WVS volunteers then talks to another elderly lady who sits in a chair (since the film is mute we do not know what they are talking about).

We then see an exterior shot of Woodlands House (Rainham Road North, Dagenham RM10 7ER), then an old people's hostel and children's home (now a Grade II listed building and registry office). Exterior shots of the house show the old people's facilities and communal areas (though we do not see any people). The rooms are spacious, with comfortable chairs, tables and a piano.