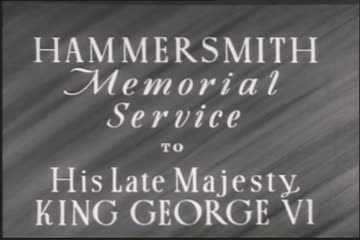 A number of men stand solemnly outside Hammersmith town hall on a grey and misty day, they have overcoats and black hats and one man has a series of medals pinned to his lapel, they all look very solemn.A procession of people are led out of the building by an official man in a top hat carrying a mace. Behind him is the Lord Mayor, a Judge and a number of dignitaries. They walk along a deserted main road with shops either side of the road. A brass band are playing and marching along the road, the procession is very long as they march past some advertising hoardings. They turn into Kings Street Hammersmith and the procession continues, we see a number of different groups represented, Deputy Mayor,Town Clerk,Local MPs and representatives of local organisations. On Kings Street we can see a number of shops including Palmers store and the Devonshire Arms public house.

The church tower of St Paul's church Hammersmith is seen and the clock on the tower states the time is 10.55, a large procession of people led by the band enter the gates to the grounds of the church and then the main procession enter the church,spectators stand solemnly by and watch.

We see a number of different groups including ex-servicemen,women's guild,brownies,scouts and the general public. The church is seen is full profile against a slate grey sky.

impressive display in the shape of a crown are also seen. The ramparts of the castle are seen against the slate grey sky, with the floral tributes below, and a large line of mourners pass by.

A river scene from a park showing Hammersmith Bridge, views of a wharehouse and other buildings by the side of the river, a couple of rowing boats speedily pass by and on the river bank we see an outline of the local industry.

Boys walk along a narrow pole and tumble into the river, and then swim off towards the bridge a group of young people on Hammersmith bridge are being interviewed by a smartly dressed man holding a clipboard.

A view of Hammersmith Town Hall which is an impressive post war municipal building, a black saloon car comes to a stop, and a man opens the door to greet the Mayor and his wife, a small party greet them and they walk up the white steps to the building entrance, they are flanked by a number of smartly dressed girls who stand by the railing.

As they enter the building the Mayor meets and greets a number of people(possibly employees) and local dignitaries.

A white cinema building with a art deco style sign 'Classic' is viewed and below is a white billboard that states 'Today Ronda Hatton 'The Brute Man' Silyana Mangand Doris Dowling 'Bitter Rice' a large crowd can be seen gathering outside the cinema and a group of people are queuing by a sign that states 'Queue Here 1/10'.

A black official car pulls up and the Mayor steps out to warmly greet a man(John Diamond Circuit Chairman) who warmly shakes his hand, the mayor is joined by his wife and another council official(Town Clerk-Horace Clarke),they pose for the camera before entering the building. The party are viewed at a reception with a number of other people(including Eric Rhodes Company Chairman) and are seen smiling and enjoying each other's company.

The smartly dressed man with the clipboard that we saw earlier is walking along a road and approaching a couple of women who are standing by an entrance to a large municipal building (the Broadway Congregational Hall), he speaks to them and direct him inside the building. An audience of old aged pensioners are seen enjoying an amateur performance on stage and clapping wildly, on stage two performers(Mother Riley?and her husband)are taking a bow.

A small passenger coach is seen driving pass a small plane at an aerodrome on a rainy day the bus pulls up to a BEA helicopter and a air steward greets four women as they leave the bus to board the helicopter. One of the girls waves and encourages the others to get in and join her.

The pilot (Dennis Bryant) closes the cockpit window and the rotor blades start to turn and gather speed until it lifts off! and flys up into the sky.

The helicopter is now landing and an Aer Lingus plane is seen in the foreground. The girls leave the plane helped by a steward and are met by the Mayor and an official party, he warmly shake the girls hands who are laughing and smiling. Finally, the Pilot leaves the helicopter and is greeted by the welcoming party.

A band dressed in country hats and cowboy stlye checked shirts are playing in a dancehall. On the dancefloor a group of dancers similarly dressed are performing a country barn stlye square dancing routine. The dancers perform the routine perfectly, and swing around to the music, before they come to an elegant end of the dance and the girls curtsy to their partners. An appreciative audience enjoy the performance and smile and clap.