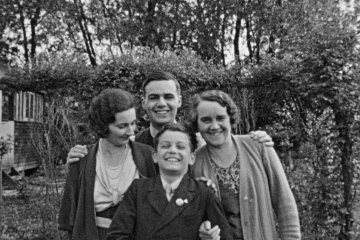 Summary: Footage of a boys sports day followed by wedding and then the family playing in the garden.

Description: Begins with a children's sports day, shots of a sack race followed by the high jump, children aged 11-13, next shot is of a boy on a bicycle taking part in a race of some kind, further shots of running races follow. Shots of boys lying on the floor in exhaustion at the finish line, potentially doing some kind of recovery/warm down exercises. Cut to shot of the spectators (parents?), dogs and sitting wicker chairs. Cut to a shot of two boys boxing in front of a crowd, boxers take a break and one of them is fanned with a towel, and then the boxing continues, potentially the children of Sydney Bird. New shot of family sitting in the garden wearing their Sunday best and smoking, potentially before they go to the wedding, one of the men (the best man?) brandishes the wedding ring. Cut to outside the church, the bride, groom, bridesmaids and others posing in the church doorway, another group is also seen standing outside the church. Cuts to shot of wedding guests throwing confetti over the bride and groom, shots of a fine white convertible sports car follow and the bride and groom enter the vehicle and drive away. Further shots of the wedding guests mingling. Cut to new shot of a wicker chair in the garden and a table with whiskey bottle, soda and glasses, Mr Bird then makes himself a whiskey and soda smoking a cigar, he puts his feet up and reads the paper. Cut to shot of a young man talking to the camera man, close up shot of a woman in a 1920s hat (Mrs Bird), then a shot of one of the Bird children in school cap, close up of Mr Bird talking to the camera. Followed by a shot of three people sitting on a garden swing. Shot of a man playing golf in the garden. Shots of people looking for a lost ball? Young boy playing with a boat in man made stream and ornamental bridge in the garden. Shot of a young boy running down the street. Shot of man and boy (in school uniform) coming out of a house and walking along the pavement and getting into a car and the car drives away. Shot of a street as heavy snow falls, shots of the garden with falling snow. Shot of two men sitting on a bench in the garden joined by Mrs Bird and Master Bird. Shots of Mr Bird and another man sitting and talking on the bench. Shot of two terriers sitting on the floor on a shared lead. Montage of shots of various people outside a building playing with the two dogs. Comedy shot of young boy sitting on a bench reading an oversized newspaper, he is standing behind someone else using the newspaper to give the impression of an elongated body. Shot of family inspecting flower beds. Lovely shot of the family together smiling, young boy and potential new daughter-in-law. Close up of Mrs Bird winking at the camera. Close up of elder son whistling who is joined by Mrs Bird who kisses him on the cheek. Mrs Bird sitting on distinctive rustic garden furniture, she is joined by the two boys. New shot of boys and daughter-in-law playing paddle board/ tennis in the garden, this sequence is filmed in slow motion. Wide shot of the two people playing tennis and boy cycling on circles around the court. Panning shot of the garden. Shot of son and daughter relaxing amongst the trees, they are joined by Mr Bird. Shot of ornamental part of the garden. Shots of Mrs Bird tending to flowers (lupins).