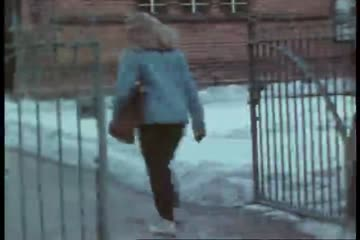 Summary: Comic short by amateur London film-maker featuring a witch and her attempts to pass an examination in spellcraft. Wonderful trick film.

Description: A teenage girl walks down a snow-covered street. She enters the gates of the Academy of Witchcraft. Title: "The Beginner". The girl walks inside the building, then enters the Examination Room. The three members of the examination board sit at a table, facing her. They greet her and hand her the Examination Paper, which we see in close-up. The young apprentice gets ready - she takes off her black gloves and puts on a black pointy hat and a pink cloak that she brought in her satchel. The board confer, though they look rather disapproving.

The young witch reads the first task; she is to "Produce a Cauldron". She takes a piece of paper from her satchel, points her wand and boom! A cauldron appears in the same spot. The examiners look on from their table, evaluating the result. She reads the next task: "Let wisdom arise from the Cauldron". Taking a vial out of her satchel, she tips out a bit of powder into the cauldron, then puts another small object in. Close-up of chief examiner's face as he observes carefully from afar. She points her wand at the cauldron, and thick smoke suddenly rises from within. The chief examiner is gone - there's an empty spot between the two other examiners. We see his head sticking out of the cauldron instead, slightly bemused. Cut to him "climbing" out of the cauldron and walking back to his seat.

"Concoct a youth restoring cream" is the next written instruction. The young witch approaches the board and hands a small glass filled with a dark liquid (not unlike Coke) to the examiner on the right. She takes a sip, and instantly changes into a young child of about 8, the pointy hat covering her eyes. Close-up of the apprentice as she gulps nervously. She is back at the table, flicking her wand thrice in the examiner's direction, who then changes back to her previous adult form. The examiners exchange displeased looks, shaking their heads and noting something down.

The young witch looks at the next instruction that tells her to "Prepare a skin beautifying cream". The examiners look on as she takes out two small jugs out of her satchel, pouring the contents of one into the other. Things aren't going well; she manages to spill a bit. She then mixes the contents with a small wooden stick, as the head examiner frowns, dissatisfied. The trainee approaches the examiner on the left and starts putting the white cream from the little pot onto her nose, eventually covering her whole face. She then dabs at it with a cotton ball, but the other two examiners look far from pleased, and we soon discover why. It's certainly not a beautifying cream, as the white layer changes into green, leaving the examiner looking rather ridiculous and ghoulish.

The young witch seems nervous, and goes to consult her book of spells. We see a close-up of her long, scary, red nails as she consults a page. Going back to the green-faced examiner, she flicks her wand and the colour from the examiner's face disappears. The witch heaves a heavy sigh as the two examiners inspect their colleague's face.

Final task is to "Array yourself in a gown of gossamer lightness". She looks down at her attire, then wraps the cloak tightly around herself. With closed eyes, she mutters a spell under her breath. One by one, we see the faces of examiners as they look on, doubtfully. Then come gasps of shock and horror! The young apprentice has opened up her cloak to reveal a very short, skimpy negligee. She looks down and, realising her mistake, wraps the cloak around her again, embarrassed.

After conferring briefly, the panel all shake their heads, ripping up and crumpling the evaluation papers, looking thoroughly displeased.

The young witch leaves the building, looking despondent. She walks down the path cleared of snow, carrying her satchel and her pointy hat with a big white "D" on it.

Further information: Mr Victor Ashlee was a local resident and keen filmmaker. He lived at Eversley Avenue, Barnehurst and later at Caithness Gardens, Sidcup. His four children named Christine, Peter, Diane and Andrew were born between 1957 and 1969 and feature in many of the films in this collection.

In galleries: It's Your Story!