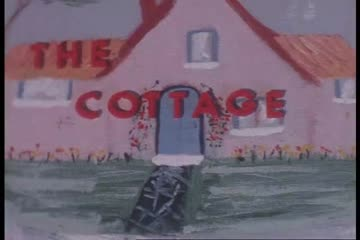 Summary: A curious amateur-made comic short, as a couple borrow a friend’s cottage for a romantic liaison but find things don’t go quite according to plan.

Description: The film begins with 'Mackay Cine Club Presents' rotating around the reel of a cine projector. The title and credits appear on home made painted backgrounds. Some upbeat jazz music plays on the soundtrack, and the scene opens in a makeshift office with a lady in horn rimmed spectacles and short red hair, with a white top and pearl necklace, she is typing at a desk. A man in a white shirt and tie stands in the background next to a card printing machine. A first person voiceover introduces him as Jim, we see that he wears glasses, and is staring at the lady, who is called Jean. A man called Vic enters, we see him from behind and he has his shirt sleeves rolled up. Jim's voiceover tells us that Vic suggests he go and talk to Jean, and gives him the key to his aunt's cottage. Jim walks over to Jean, and she stares up at him pensively. They talk excitedly, and Jim tells us that she is interested in going out with him, Jim walks away. The music stops.

We see a wall in a dingy room, images of topless women torn from the pages of a magazine are crudely stuck to it. Jim walks in and places his jacket on a chair. He then takes a comb out of his pocket and stares into a mirror while combing his hair, he sits down on his bed and reads a book called 'How to Succeed with Women'.

Jim's voiceover continues, giving a commentary on events. Strange noises emit from the soundtrack as we see a car speeding down a country road on a sunny day, as it speeds past and onward we see that it is a light blue convertible. Classical music plays as the car slowly ambles into a drive and stops, Jim and Jean are inside. Jim gets out of the car, he is wearing a black suit and tie, he helps Jean get out of the passenger seat, she is wearing a white dress with a cape and gloves, they walk into a well kept garden. They walk hand in hand and Jean smells a red rose. They settle down on the lawn and embrace.

The couple walk into a small living room, Jim puts on the radio as classical music continues to play, and they dance around the room. Jean sits down, and Jim goes over to the drinks cabinet. He picks up a bottle from a large selection. He hands Jean a drink, he sits down close to her, they clink glasses, and embrace, Jim pulls a cord and the lights go out.

Jim is back in his room reading his book. Jean comes out of a red brick suburban house, dressed in a pink dress, and white gloves. Jim rides around the corner on a motorbike with a side car, and pulls up outside Jean's house, he is wearing a black and white helmet. Jim opens the side car and clumsily helps Jean in, he secures the tarpaulin, climbs on the bike, and drives down a street with identical houses and well kept hedges.

The motorbike comes to a stop on a country road, the sky is overcast, upbeat music accompanies the scene. Jim inspects the vehicle, opens the side car and helps Jean out. Jim tries to start the bike as cars zoom past, Jean looks fed up. Jim fiddles with the engine, then they both start to push the bike along the road. As they continue alone a smaller road it starts to rain, the music stops. As calmer music starts they abandon the bike and run into a small house.

Jim enters a dark room and lights some candles, two opposing music tracks play as we see two lit candles in a room with red patterned wallpaper. Jim tries to hug Jean but she flinches. He takes off his helmet. Jean looks around. Jim takes his trousers off as the voiceover informs us that he has wet clothes. Jim winds up a gramophone and puts a needle on the record, they start to dance. A light is turned on and we can see the room much more clearly. Jim looks inside a drinks cabinet and finds some sherry, he pours it out into two glasses. Jean takes the sheet off a couch with a floral pattern. They both sit down and Jean drinks her sherry, she winces at the taste. Jim tries it and does the same. They both sit pensively. Jim puts his arm round Jean and they embrace, he reaches for the light switch but his hand touches a live wire. Everything goes dark.

He lived at Eversley Avenue, Barnehurst and later at Caithness Gardens, Sidcup.

His four children named Christine, Peter, Diane and Andrew were born between 1957 and 1969

and feature in many of the films in this collection.

In galleries: Love and Marriage