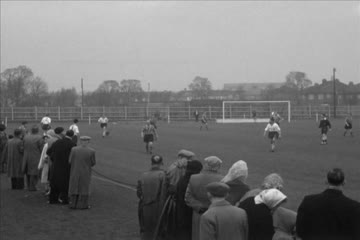 Summary: The Dagenham Cables (DC) football team, the works team of Telephone Cables Ltd, play a match at their sports ground on Crown Street. A young girl plays with doll in a garden

Description: The Dagenham Cables (DC) football team, the works team of Telephone Cables Ltd - in white - play a match at their sports ground on Crown Street. In the background are houses on Sandown Avenue and Dewey Road. Spectators huddle round, dressed in long coats, head scarves and caps. A couple of young children tussle in the foreground; and in the distance a tube train passes by. The ball goes out, and is retrieved by the opposition for the throw-in. After play on the opposite wing, a DC player slips as he shoots - an easy save for the opposition goalie, who bounces the ball, then hoofs it into the air. A DC attacker tumbles, and the ball runs through to the opposition goalkeeper. An awkward tackle leaves a DC player briefly nursing a sore back as play continues. The ball is chipped in to the box but collected by the opposition goalkeeper, who throws it out to the mid-field. An opposition defender kicks the ball into touch. The opposition lose possession. A DC ball into the box is headed away. An opposition player controls the ball with his head and lumps it into the opposition half where it is collected by the goalkeeper. A DC player is tackled, losing possession and his balance. The ball is kicked long, and the DC goalie dives to gather the ball. On the left wing, a DC attacker runs clear of the defence and cuts inside, but his cross is blocked, the ball going into the air. The ball is headed back into the box, headed clear to the wing, then headed backwards to a DC team mate who puts a high ball into the box. This is met by a DC player who attempts a semi-backwards lob towards the goal, which the goalie saves. The ball goes out a couple of times. A subsequent DC throw-in is taken, but play is stopped, possibly due to a foul. Play is lively, if hard to follow, with an extravagant leap by a DC defender to clear the ball into touch. After some untidy play, the ball is played out from defence and out to the wing. A DC player passes the ball along the wing, slipping in the process, but the ball is intercepted and then cleared. An opposition defender, under pressure, shields the ball, allowing it to go out for a goal kick, the DC attacker falling to the floor. The ball is played forward by the DC team, but bounces off someone’s knee. They are dispossessed and the ball is kicked away by an opposition defender, with a couple more falls on the slippery ground.

A young girl, around 5 years old, runs down the garden path towards the camera, pushing a doll’s pram; she wears a hand-knitted pinafore dress over a cardigan. She arranges her doll in the pram, brings it to show the camera, and runs back towards the open door.