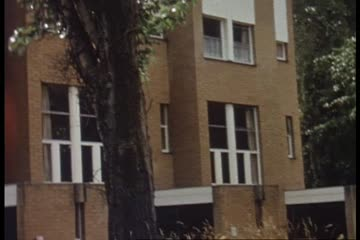 Summary: The James visit Janet Bottomley in Cambridge. They visit the Botanic gardens, and Eltisley village. They also visit Olive & Harry Hutchinson in Ipswich. Harry like Fred worked for Barclays. The film shows Harry inspecting Daisy's camera, and then walking and talking in the garden. The house is very impressive . Harry fires an air rifle at a target.

Description: Intertitle reads "Janet. Cambridge and Eltisley." Daisy James and Janet Bottomley. They are both dressed smartly in dress and jacket and Daisy wears a red mac. They are both wearing white shoes suggesting this is the summer. They are in a modern housing development. They admire the gardens and set off to explore the University Botanic Gardens in Cambridge. They look at and discuss flowers of which there are many, the beds are bursting with different varieties and colours and clearly very well maintained. It is a windy and overcast day.

They look at the Winter Garden which is formerly laid out in separate beds with a pathway. A mother works by with three young children, from their clothes it is summer as the girls are wearing cotton dresses but all are wearing cardigans as it is a windy day. Two older women are seen in the distance all wearing hats. They continue to explore the gardens and are clearly very interested in the flowers. They come to a giant rockery in the gardens at the base of which is a large pond packed with lily pads. Shots of a squirrel darting across the grounds and eating. Children feed a large number of ducks on the lawn, and the ducks seem very tame. The mother is holding bags of food for them.

Shots of the ducks on the pond dipping their beaks for food. The water fowl are being fed by hand and then launch themselves into the pond off a rock, shaking their tails as they enter the water. A mother and young child with walking reins watch and feed a grey and white duck(?), who seems very tame and hungry and determined to be fed by the young child. The mother does not intervene. The ducks are then back on the water swimming around and enjoying themselves.

Daisy has removed her mac and she and Janet are on a rock causeway on a lily pond. We see lots of reflections of them in the water. Fred and Daisy James are by a colourful bed and discussing flowers. Fred is dressed in a grey suit white shirt and bow tie and is carrying a camera case.

We are back at the modern development and the women walk under an arch in the buildings into what looks like a public green space.

Daisy and Janet are in a front garden the perimeter of which consists of sun flowers in bloom. It is a very windy day and the women are discussing the flowers. There is a shot of a side alley with them in the front garden. To the side of the alley is a garage with a white triumph parked in front of it. There is a bed of cosmo flowers in bloom suggesting the summer. In the front of the bungalow we see the Jame's Austin Cambridge parked in front of the white triumph.

Daisy and Janet are still discussing the garden. The wind is clearly visible as the women's hair is blown around and the flowers sway. There is a close shot of a sunflower head and it's petals are falling.

Daisy and Janet are walking down a country lane with a clapperboard cottage and other picturesque cottages in view. Janet is carrying a camera case. There is a distinctive white thatched cottage that is set back from the road with a garden and a yellow front door.

A village green can be seen with cricket screens and Daisy and Janet continue to walk in the distance.

We see Eltisley Parish Church and a give way traffic sign, and then a post office sign. A public footpath sign shows Gt. Gransden Road. We see a wheat field that has been partially harvested, wheat blowing in the wind. Daisy and Janet are walking on a single track by the road.

Shots of enclosed cockerels roaming. A black Labrador dog looks at the camera with a beautiful shiny coat. Shots of Daisy and Janet walk down the road with reflections in a puddle. They return to the bungalow and go down the side passage to a door and enter.

There is a shot through an open five bar gate to an impressive country style manor house with a sweeping drive up to the front door. It has lead

pane windows and wisteria climbing up the front of it and it has an impressive tiled roof.

Daisy is showing Harry her camera, possibly she is showing him how to use it. She is wearing a smart waisted brown suit, and he is wearing a grey suit with a tie, tie pin with a handkerchief in his breast pocket which is the same colour as his tie.

Harry looks through the viewfinder and hands the camera back to Daisy. They are talking and laughing in the drive. They then walk towards the house where he is pointing out flowers for her. There is a Mk II jag parked in front of the house. Olive, Harry and Daisy emerge from the house and walk across the front lawn. They are clearly talking about trees and plants.

There is a small wooden annex house in the grounds with a small bench in front of it. They admire the property and Olive leans on Harry's shoulder.

Harry is fixing a shooting target to a tree in the garden and we then see him firing many times at the target. He stops to reload the gun at times and Daisy, Olive and Harry discuss his aim. He puts a new target up and there are many more shots of him firing at it. Daisy takes pictures with her camera of him as he shoots.

Daisy and Olive walk amongst the flower beds in this extensive garden. It is summer and there is lovely light and everyone looks happy and relaxed.

Fred takes a lovely exterior view of the house and then we see a shot from inside the house looking down into the garden where Daisy and Olive are talking by the rose bed and Harry is firing his gun.