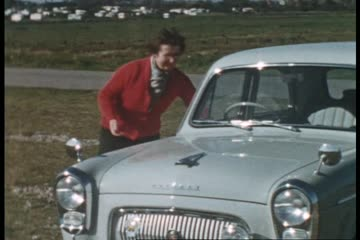 Description: Opening shot Ford Prefect 108 HVW shows Car grill with AA badge and Ford badge. Daisy James gets into car and smiles at camera. Daisy reverses the car and drives off onto road. It is a sunny spring day.

Poster advertsing Lavenham Parish Council. A Meeting of the Parish Council Monday September 23rd 7.30pm. Daisy walks along village high street-Lavenham(?) comprising of whitewash houses, shingle and brick architecture. The road is empty and quiet and old Tudor houses can be seen at the bottom of the hill. A shot of a country road over a bridge with white posts either side; the James' Ford Prefect comes into view and goes over the bridge followed by a convertible car.

We see a sign on a gate marked 'Debden House' in Woodbridge Suffolk. The gate swings open and the James Car drives through with an L plate on the back. A group of smartly dressed women in 1950s suits can be seen in garden talking. The house is large, white render with green french style shutters, men can be seen outside talking. Two men and a woman can be seen reading a notice intently. They appear to have camera bags. A garden in bloom, close up of a poppy and Gladioli. A smartly dressed man in a black suit walks by holding a camera. Daisy with a camera, walks into the garden and stops to admire the pond; a large landscaped garden can be seen in the background.

Daisy walks up to the house and meets a smartly dressed woman. They sit on a bench and smile at the camera. They walk across the lawn towards the camera.

Daisy can be seen with a man and a woman outside a house talking. A woman in a yellow blouse and full red skirt (classic 1950s fashion) walks towards the front of a smart tudor-style cottage; the front door and windows are painted sage green. Daisy joins the woman and waves her goodbye as the woman goes indoors.

A casually dressed young man with green windcheater is in a tree in a forest and leaps down and smiles at the camera. A dead tree is viewed with a group of people who walk away from the camera into the forest ; Daisy and the men are carrying cameras. The group go down a woodland path in bright sunshine.

A beautifully illuminated shot of an interior of wall in a conservatory with contemporary patterned curtains. There are posters of France and travel on the walls. Upholstered chairs are set out in semi-circle conference style. Daisy is with two people discussing the posters and other material on the walls. A large original 1954 colour poster "Visitez La Bretagne" by Jaques Nathan shows a sail boat and harbour scene. A group of people are gathered in the conservatory; Fred James can be seen at the front of the room next to the speaker. People are taking their seats, a man wearing fashionable sun glasses looks at the camera before sitting down. Fred and another man address the room. Fred starts to speak and people look on intently, he is casually dressed with bow tie and points to an easel with a watercolour picture of a camel with two people sitting on its back.

Daisy picks purple heather on a windy day. She smiles to camera and offers her bouquet of heather to it.

From the interior of the car we see a large hay stack on the right side; the car passes cyclists and telegraph poles. The car passes through a town. The car is parked by a country wall and Fred James gets out of car and walks towards an ornamental historical sign for Orford with coat of arms dated 1579. The coat features two lions and a turret followed by a sign to the castle. Shot of exterior of Orford Castle (Norman); Fred James is seen walking by the side of the castle, waves and walks up the steps.

A ornamental wrought iron sign shows Walberswick and features a three mast sailing boat with ornate filigree ironwork and a crown at the top.

A shot of the Bell Inn Hotel sign with a large bell in the centre leads to a village view, a further sign comes into view showing Morning Coffee, Afternoon Teas with a small sign underneath showing Walberswick Cottage Tea Rooms. A village green with a small playground comes into view and two women and children on cycles, walk down the path.

Daisy can be seen approaching a large puddle with the reflection of a house.in it. She strolls along a coastal estuary path with a small jetty and boat,which is the ferry between Walberswick and Southwold. There are views of sailing, rowing and dinghy boats sailing down the River Blythe and white houses can be seen in the distance along with the Southwold water tower. Daisy walks along the river bank.

A white country road sign to Aldeburgh 3 1/2 miles, marked A 1094, by a cross roads with the James car driving along. Shots of Aldeburgh golf course with lady golfers on fairway. A flagpole on the golf course with a small red pennant fluttering in the wind, followed by shot of club house and golfers walking by. Close up of sign for Aldeburgh Golf Club, followed by a close up of cinema poster at Aldeburgh cinema for a film with Sterling Hayden, on the 13th September.

Aldeburgh High Street with cyclists and cars is seen. The James car comes into view and drive by. The car approaches a white building (Dial House) which is "For Sale". It has a balcony and sun dial on exterior side wall. Daisy parks car opposite local landmark Moot Hall, a timber framed building dating from the 16th century. Daisy walks down the road towards the white building and looks at the sun dial on the side wall-Dial Lane.

A further sun dial with a latin inscription Horas Non Numero Nisi Serenas "I count only the sunny hours", can be seen on the side of Moot Hall. By the base of the Moot Hall, people are viewing bric-a-brac stalls and are enjoying the sunny day. A notice board advertises a "Sea Angling Event of the Year", Aldeburgh-On-Sea, Sunday 15th Sept for the "Walter Lovett Cup" with a prize of ten guineas. Daisy walks back to the car from Moot Hall.

Shot of car driving along beach road towards Thorpeness. The car pulls into parking area and Daisy waves, talks to camera and picks up Fred's hat. Fred is seen gesturing at his head and indicates he wants the hat on his head. Daisy throws hat and laughs. Fred reaches down to pick up hat and puts it on his head. He then opens boot and gets out foldaway chair and walks down the pebble beach. He struggles to open chair, in a comedic fashion, and the indicates to Daisy to sit in chair.

Daisy sits in chair with newspaper, she relaxes and enjoys the sun and breeze. Waves lap against the shore and we see Thorpeness in the distance. Daisy is laughing and puts the newspaper on her head, as if to sleep, but struggles with it in the breeze.

Intertitle: Hat Trick written in sand on the beach with Fred's Hat thrown into shot.

Waves come in and Fred with hat on is seen in profile, hat blows off and appears on beach with footprints appearing, as if by magic, in the sand, as in a dream. Daisy looks at the footprints, kneeling down on the sand with a bemused look on her face. More foot prints appear and Daisy continues to investigate on her knees. She continues to look for further clues, and ruffles her hair and head. Fred's hat appears and blows away. Fred appears without his hat, looking perplexed, and then suddenly the hat flies back onto his head (reverse motion sequence) prompting a surprised look. Daisy appears asleep, with newspaper on her head, and then awakes, stretches and yawns, and then walks back up the pebble beach looking back. Fred looks frustrated and points to chair and newspaper which have been left behind. He stumbles up the pebble beach after Daisy.

Intertitle The End written in sand, washed away by a wave.