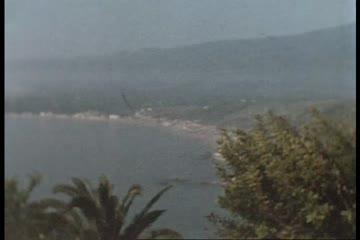 Description: The film starts with a panoramic view over Torquay and its bay. There is a palm tree in the front of the shot and we get a very definite feel of the 'English Riviera'.

There is a change in location and we see a sign in Epping Forest, that is advising people not to remove anything from the forest. There is a £5 penalty if you do so. We see Daisy James walking in the forest by a clump of young Silver Birches. There is a small development of 'tudor' style houses, probably in Dale Gardens with a green in front of them. There are many different types of trees. We see a young man cycle by on a bike. We see two men chopping and pruning trees with pick axes. There are another two men who are clearing the felled branches and foliage. One man can be seen at the top of a very tall tree that he is pollarding. He is in shadow shot against the sun. Very dramatic. We then see a man, further down the tree, cutting branches and we see the branches falling to the ground. There is a Ford Prefect parked nearby and a Morris Minor being parked.

On the ground there are two men sawing a massive branch, they are wearing work clothes. Many of the men are smoking with cigarettes hanging from their mouths as they are working. Another man is high up in a tree sawing, whilst we see a rope in tension, waiting to pull the severed branch straight to the ground.

Shot of a painted red Victorian cast iron column in Torquay harbour from 1865 with Daisy James holding a lifebuoy which is attached to the column. Fred James then takes a shot of the bay through the lifebuoy. The water in the harbour looks turquoise and beautiful. Shots taken from a boat out at sea, of a large frigate on the horizon and a small motor boat that passes close by. Daisy is looking out to sea from a scenic point up above Babbacombe Bay. The cliffs have a distinctive red colour and are covered in evergreen foliage. From this vantage point a retired couple look through a telescope at the bay.

Daisy is down on a shingle beach by a wooden sail boat with a distinctive canvas sail. A woman walks down to the boat wearing a black cardigan and a striped cotton pleated skirt very reminiscent of the 1950s. We see the boat being pushed out to sea and being sailed. There is very little wind and the boat looks becalmed.

A view from Brixham Rugby Club's Tribute Stand on match day. We see spectators slowing filling up the stand and the teams entering the field passing the ball to each other. A variety of shots throughout the game showing tackles,scrums,players running up and down the pitch. Brixham rugby club-nicknamed 'the Fishermen'-are playing in black and white kit. By today's standards there are few spectators.

Daisy appears by statue of a unknown Whig gentleman. We then see a notice for the Mayflower which is being reconstructed in Upham shipyard Brixham. This was begun in 1955 and completed in 1957 when the ship sailed for the United States.