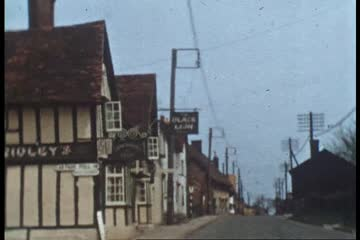 Summary: A beautiful shot film showing a journey through Thaxted village on a spring day. The film is mostly shot through the front screen of a car with locations including Thaxted, Southend, Windsor, Hastings.

Description: Opening Title : ‘Here and There’, written with coloured chalk on stone steps.

A beautiful shot film showing a journey through Thaxted village on a spring day. The film is shot through the front screen of a car.

The car passes the Black Lion Pub and then travels down the High street, showing shoppers looking in windows of different shops,(a grocers, TW Pannel and a Fishmonger.) Cars are parked along the High Street and the Star Inn comes into view. We see 'tudor' style black and white thatched buiding, prominently situated in the fork of the road comes. The road is very empty and a lone cyclist rides by as the camera pans to a town in the distance and Thaxted Parish church spire. A worker dressed in flat cap and dungarees pushes a dark green dust cart. In the background we can see several black Ford Poplar cars parked and a red phone box. A prominent tudor style black and white assembly space can be seen in the fork of the road. Two women dressed in 1950s attire appear. One is in a tailored dress and the other, Daisy James, is in a tailored suit with pearls. They both have small elaborate hats and handbags, and wander in a well maintained grave yard area amongst gravestones. There are some white stone cottages nearby. There is a blossoming cherry tree and daffodils. The women smile towards the camera. They admire the flowers and the women laugh and seem very relaxed. They are clearly enjoying themselves. They wander out of the shot as a small black cat walks past. The next time we see them they are emerging from a church-possibly, Thaxted Parish church. They look back and admire the building.

They then stroll by the village pond and head uphill back to the village. Daisy James hams it up trudging’ up hill’. In the background there are houses and a Norman church. A woman ahead is seen pushing a bike.

A view of a large fishing ship with one funnel, passes by on the water, filmed through silver railings. A smaller tug like boat with three people on board chugs past a jetty and into a harbour setting. A life boat pier with a ramp into the water, is in the background. The boat exits from the harbour.

People are waiting expectantly at a small station platform on Southend pier. On the roof of the platform, is a building with a cut out model of a war boat and a green and white train is seen at the station.

A train travels along the pier. By the side of the tracks are silver railings with a red box and a warning sign - 'Danger this railway is alive with electricity'.

Fred James dressed in a hat and brown mac walks up the pier. Views of a lantern and hall with a clock in background. He walks away down the side of the railings and looks back and waves. Views of the mud flats, shot from the pier, include artistic close ups of water glistening in the dips and then there a wider shots of the boat,s lying marooned at low tide, whilst people walking past in the distance.

The ‘Southend Galleon’ which was probably a tourist attraction in the 1950s is filmed extensively showing many details on the boat e.g. coat of arms, flags,plaques, ornate cartoon like fishes in gilt. A model of a sea serpent is wrapped around the ships central mast.

On a sunny day a woman in a red coat pushes a bike through a cobbled courtyard by Windsor castle. A Queens Guard, dressed in a distinctive red tunic and bearskin hat stands by a wooden hut and marches out of view. A child pushing a bicycle watches.

A changing of the guard ceremony takes place and is watched by four people.

Daisy James walks on the High street and approaches Nell Gwynn's House. She is dressed in a belted camel coat and matching camel cloth hat, with a bow at the back. She stops and looks in the bay window, full of porcelain and china figurines of dolls and animals .In the front of the window is a pair of Meissen porcelain Staffordshire spaniel dogs.

There is an ornate sign on a white wall which states ‘In this Historic House Nell Gwynne Lived’, and a sign on the pavement states ‘Nell Gwynn’s House AD 1640 ‘Where she lived’. (There are two different spellings of Nell Gwynne).

A number of guards are outside the castle by black iron gates. One marches to the left and turns sharply to be met by two other guards who face him more guards join them and march past the remaining guard salutes and and moves the rifle from one shoulder to the next.

View of a Windsor Castle tower with the Royal Standard flag flying, indicating that the Queen was in residence.

Fred James is on the castle battlement and approaches a black cannon gun. A boy is sitting on the barrel of the gun and both look out to view of Windsor countryside.

Daisy James visits a red brick and timber framed building set in landscaped grounds. Daisy James appears at a white stone statue possibly a lion holding a shield and the camera moves showing her wearing a cream coat with gloves and walks up white stone steps.

The James are on a fast moving riverboat and are filming people along the riverbank. There are two men in a wooden rowing boat both attired in shirts and ties, and then a rowing boat with couples all attired in jackets, ties and coats, enjoying a day out.

Daisy James is shown walking along the beach front. The shots are clearly set up and at one point she smiles directly up at the camera. She is very relaxed and happy. She is wearing a fitted jacket and scarf over a loose skirt and high heels. As ever she is carrying a handbag!

Daisy is standing in front of Marine Court, a modernist concrete building built in 1936, it is shaped like the ocean liner, the ‘Queen Mary’.

Daisy skips up the steps of a grassy hill towards a rocky peak on a hill. There is panoramic view overlooking the South Downs out towards the sea. We see a local bus come and go into Hastings.

Ariel views of the bay and countryside show a view over Hastings towards Eastbourne Pier.

Fantastically atmospheric shots of Daisy James walking on the South Downs.She is alone and walks across and through shots.

Daisy James is running on the downs and is joined by an over-excited dog who runs up and jumps on her. She tries to shake the dog off laughing and walks on looking back towards the camera in profile to the top of the hill.

Seagulls can be seen in the blue sky.

A beautiful shot of a fisherman working on the beach with wooden fishing boats in the background.

Shots of the sea, with waves lapping a pebble beach. These shots are very evocative and make you feel that you can smell and hear the sea. There are two men fishing on the edge of a quay, both dressed in sports jackets and pressed trousers. One reels in his line as we see a young couple lie together on the beach. They are clearly dating and seem oblivious to the people around them. The sea is beautifully blue and framed by chalk cliffs.

By the side of a wooden hut (there is a sign which is obscured but we can make out the words 'sea','club','Hastings'). A group of fisherman dressed in traditional fisherman outfits are engaged in some work activity.

A number of fishermen walk across the beach carrying equipment to their boats. Boat number 43 is pulled by 3 fishermen across the shingle beach with a life boat station in the background. A man places a large yellow and red fishing umbrella against his boat.

Two schoolgirls dressed in school uniform help to pull a small sailing boat called 'Kismet' to the edge of the sea.One schoolgirl picks up a plank of wood and runs after the boat. Three fishing boats are in the sea, and in in one boat a fisherman puffs on a pipe and starts to row. The boat is very low in the water and all the men in it are dressed in suits and overcoats one is wearing a fedora hat. Other fisherman are busy starting a boat’s motor and getting the equipment ready.

Beautifully shot scenes of fishermen and boats moving about in the water. Some of the Fishermen are in traditional clothes and others are wearing shirts and ties.The sea looks calm and glassy and all the shots on the beach are atmospheric and sum up a feeling of an active fishing industry and a real community.

Sea gulls fly and swoop under a blue sky. The fact there are so many gulls above the sea and on the beach suggest that the catch is in, and they are looking for food. The light changes as the sky turns grey. The sea becomes rough and there are many shots showing waves and spray. These are beautiful.

A classic 1950s Guinness advertising sign, features a toucan with two pints of Guinness balanced on his beak. Daisy James is on the beach dressed in a red hat and checked mac looking out at a stormy sea. She is taking pictures with her stills camera. She smiles at the cine camera while she shuts her camera case.

People walk along the side of the beach, as choppy waves crash in.

Three boat hulls of red, blue and black are in profile as a fisherman shovels pebbles away from the hulls as waves crash in on the shore.

An upturned small boat, possibly wrecked or abandoned is by the sea edge. Waves crash into and around it creating white foam and the stormy sea is framed against the sea wall. There are many empty shots of the sea which are fantastically atmospheric and awe inspiring.

Further information: http://www.francisfrith.com/ Picture of Southend Galleon 1950 and personal memories of Southend in the 1950s