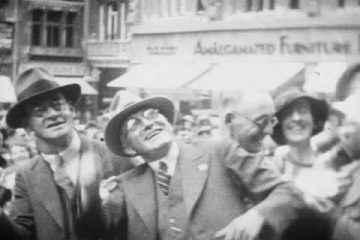 Description: Part 1 of 2 of the 4th International Games for the Deaf. This part focuses on the special service outside St Paul’s Cathedral, the opening ceremony at The White City Stadium as well as several athletic events. The second part documents sporting events such as swimming, diving, football and tennis.

CAPTION: Distributed by the Film Library of the British Deaf and Dumb Associations

CAPTION: After the special service at St Paul's Cathedral

Scenes at St Paul’s Cathedral: exterior views of St Paul's and the crowds at the Special Service for the commencement of the games; the filmmaker shows those attending, groups conversing in sign language and wider pans of the crowd who, looking towards the camera, wave and sign. This is followed by shots of scouts and guides (mostly adults) standing to attention.

At the White City, the first purpose-built Olympic Stadium, athletes and delegates parade around the track. The Finnish team are captured first, followed by the French, then the German squad, who are led by a young man carrying a Nazi flag. More nations follow, eventually forming a line on the field.

Lord Desborough is shown giving a speech. He welcomes the athletes, while an interpreter sign to the crowd and there are views of the packed stands and people moving down the aisles towards seats. On the field, a formally dressed couple walk towards the camera and sign; two men are captured mingling amongst the athletes; Mr W. Baird (Hon. Secretary of the International Sports) stands arm in arm with a female athlete who sports a number ‘1’ jersey, both smile for the camera.

This sequence shows Mr W. Baird meeting various athletes, introducing them to the camera - using sign language - and shaking their hands. A German athlete crosses the finishing line after a long distance event and members of his team celebrate by running onto the track; the group are then presented in front of the camera.

The final scenes are of the spectators watching from the stands. The camera pans along, people point it out and sign. Mr W. Baird waits on the gangway laughing and joking with a woman and several others. Part 1 closes with another view of the crowd signing to the camera.