The Wards of Woolwich 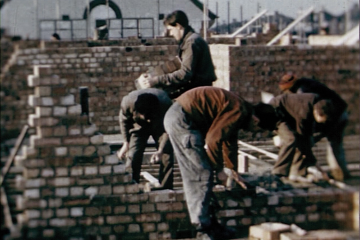 Summary: A municipal film on the services provided by the Metropolitan Borough of Woolwich.

Description: The film begins with a couple in broadly medieval costume acting in the grounds of the Great Hall at Eltham Palace. The next scene is of a modern couple sitting on the grass in a park (perhaps Shrewsbury Park), perusing copies of 'House & Garden' and 'Ideal Home' magazines. They find an advertisement of interest, mark it and leave. The couple look in the windows of estate agents, including the Furlong house agency and Savage & Co. before visiting the Borough offices in Woolwich Town Hall. At the Borough offices they go to the Borough Treasurer's Department to seek a loan for a house purchase. An officer of the borough goes through some paperwork with them, they sign a document and it is passed on to the financial committee for approval. With finance in hand, the couple agree a purchase at the office as Savage & Co. We next see the couple outside the Woolwich District Registrar Office where they exit as man and wife and are photographed with family and friends. Next we see Woolwich town centre, including Hinds department store on the High Street. A montage of shots follow: Some council workers repair an uneven pavement; the Woolwich Ferry crosses the Thames; improvement works are carried out on the Woolwich Power station; a tug leads a large boat out of its moorings; passenger and freight trains pass through Woolwich; a street market with fruit and vegetable, fish and flower stalls selling their wares in Woolwich town centre; a family play with their baby in the park. The film then switches back to the couple as they leave a train at Abbey Wood Station and take a taxi to their new home on Howarth Road. While doing the lawn in the back garden, the man meets his neighbour. The post man delivers a rates demand, to which the man takes some offence. He and his neighbour go through the services provided for the rates. The remainder of the film features shots of those services. It begins with housing, views of 'slum' terraces and ruined buildings around 'Paradise Place' and Woolwich Dockyard, scenes of demolition work and new house construction by the council. A new primary school is shown with children playing in its grounds. In the offices of the Borough, men and women work on the development plan for Woolwich. They use maps, plans and three-dimensional models of homes. Men from the Borough engineers department perform road works and repairs. Refuse collectors empty bins into their dustcarts. Next is the Parks service, with facilities including a children's playground, a pitch and putt golf courses, greenhouses full of flowers and floral beds in a park. The public library and museum is introduced, with the couple filmed going to the library. A milk deliveryman is stopped in the street by a public health officer and a sample of milk taken for testing. Some swimming baths are shown in use. The film ends with the couple going to see a performance of 'Twelfth Night' at Well Hall Pleasaunce (perhaps another performance by the actors who appeared at the beginning the film), walking through the gardens on their way.

Further information: The film was written and produced for the Woolwich Borough Council by members of the staff. While it was made as a sound film, the original soundtrack has proved technically difficult to transfer, and the digital copy is mute.

In galleries: Love and Marriage