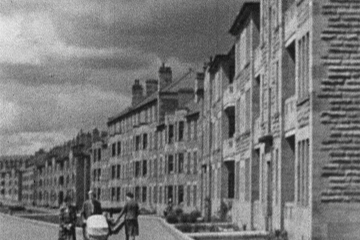 Description: Segment 1 Opening credits. Shots of the Scottish highlands as the narrator describes the isolated communities who live there, and how they are met by medical attention. A district nurse is seen walking up a hill, and a doctor drives through the countryside. A doctor also travels by row boat to an island community. And islander sets off a smoke signal (telephones not being accessible), which is received on the mainland and a doctor called for. The narrator points out that often, gales prevent evacuation of patients to hospital by boat, so an air ambulance is also needed. Next, an industrial city is seen, which the narrator describes as being overcrowded and with bad housing. Children play on a dirty pavement. The narrator says that services are improving an antenatal clinic is seen. Mothers attend a babycare class. A mobile maternity unit is called out a nurse sterilising a bundle of medical equipment and packs it into a case. The nurses travel by car to the mother. Time start: 00:00:00:00 Time end: 00:04:37:12 Length: 00:04:37:12 Segment 2 The mother receives a blood transfusion. The child welfare clinic is seen a nurse weighs a baby. A nursery school class is shown next children learn to wash their hands and eat school lunch together. Primary school is then seen children are examined by the school medical service. A boy has an eye test. The narrator also promotes the diphtheria inocculation programme. The boys are taught to wash their hands properly and the girls are taught how to do laundry as, 'it is right that the mothers of tomorrow should know how to keep a household clean.' The children all drink a bottle of milk provided by the school and eat school lunch together. Time start: 00:04:37:12 Time end: 00:08:27:09 Length: 00:03:49:22 Segment 3 A holiday camp school in the countryside is seen. The narrator explains that city schools were evacuated to these schools to protect the children from air raids in WWII. City factories are seen, mostly staffed by women, carrying out war work. One woman is seen she feels ill and goes to the factory doctor who examines her. A special hospital built to receive war casualties is seen the narrator says that these hospitals were not actually required for casualities, so are being used to treat civilians and for rest homes. The female factory worker has been sent to rest at the hospital. She walks in the countryside with another female patient. The narrator explains that civilians suffering from shock due to air raids also recuperate at the rest hospitals. Time start: 00:08:27:09 Time end: 00:12:21:14 Length: 00:03:54:05 Segment 4 The ARP first aid medical service is briefly seen. Next, the Port Medical Authority is explained. A doctor examines a ship as it enters the port. The ship officer meets the doctor and shows him the ship's papers, including a 'Deratarization Certificate'. The doctor inspects the dead rats for signs of plague. The crew, of Asian origin, are also inspected by the doctor. One sick sailor is sent to a hospital his stretcher is lowered to the ground by a crane. The narrator goes on to explain the new housing being built in Scotland, mostly for working class families. He explains that although the war has slowed down building, plans for new housing and community centres are ready. Children are seen playing in public parks. End credits. Time start: 00:12:21:14 Time end: 00:18:11:15 Length: 00:05:50:01

Further information: This video was made from material preserved by the BFI National Archive