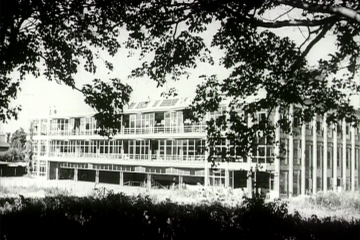 Summary: The story of the Pioneer Health Centre, Peckham, started before the war by private initiative, and designed and equipped as a community club where the whole family might enjoy their leisure together. In the film we meet the Jones family - Maureen, Fred and Johnny - and through their experiences we learn of the aims and achievements of the Centre, and of the unique piece of research into social biology behind it. 3 segments.

Description: Segment 1 The film begins with a view of the Houses of Parliament. The narrator invites the viewer to take the no. 35 tram to Peckham, south London. The residential area is seen, including the Centre. The various activities available at the Centre are shown: gynmastics, a children's play area, swimming, tennis, rollerskating and sunbathing. The narrator explains that the Centre is made up of a community of families and not a mass of individuals. He also explains that the staff are really biologists and doctors, studying the behaviour and actions of families, conducting research into social biology. A female narrator introduces the Jones family, new to the area and first-time visitors to the Centre. They are shown around and are each drawn to different activities. They meet with two doctors who explain to them the work of the Centre. The family returns home and think about joining. Time start: 00:00:00:00 Time end: 00:06:56:02 Length: 00:06:56:02 Segment 2 The Jones go for their first health check at the Centre. A doctor explains to Maureen, the mother, that she requires a slight operation to correct some damage received during childbirth, but Maureen is upset by this news, having previously thought she was fit and well. Johnny, the son, and Fred, the father, are both fine and regularly attend the Centre. Maureen at first attends to watch Johnny but soon stops coming altogether. At home, Maureen and Fred argue about the Centre. Fred stops attending regularly and Maureen realises he misses it and decides to go back to see the doctors about having the operation. Time start: 00:06:56:02 Time end: 00:13:42:12 Length: 00:06:46:10 Segment 3 The Jones all resume attending the Centre regularly, and Maureen learns badminton and takes up swimming. Maureen and Fred attend social events in the evening, including dances. Maureen becomes pregnant and the Centre helps with advice, exercise classes and check-ups. The Centre's nursery is seen. Fred and Maureen attend an evening concert at the Centre. Maureen has her baby, and Fred discusses their progress with their friends at the Centre. Time start: 00:13:42:12 Time end: 00:21:01:24 Length: 00:07:19:12

Credits: written and directed by JB Holmes, produced by Paul Rotha, photographed by James Ritchie, researched by Langton Gould-Marks and edited by Dick Storey. A Central Office of Information film made for the Foreign Office.

Further information: This video was made from material preserved by the BFI National Archive.