The germ who came to dinner 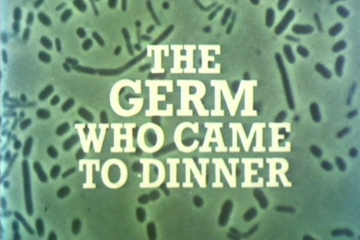 Summary: The daily menace from some of nature's tiniest tyrants - food bacteria - is the theme of this film on hygiene. It drives home the reasons why harmful germs flourish and multiply rapidly as a result of ignorance and carelessness. It illustrates the histories and habits of food-poisoning bacteria that can enter the kitchen, become dangerous and contaminate food. 3 segments.

Description: Segment 1 Over footage of hurricanes and natural disasters, the narrator explains that 'nature's tiniest creations', bacteria, can also kill people. He explains what bacteria are, and how some types can cause disease and poison food. Various types of bacteria are shown. Animations are used to show how bacteria are transferred from one place to another, therefore contaminating food and releasing toxins poisonous to humans. A montage of foodstuffs that are susceptible is shown, in particular, meat, fish and poultry. Flies, cockroaches and mice are shown in a kitchen, and the narrator explains that bacteria can be spread in this way. Time start: 00:00:00:00 Time end: 00:06:56:19 Length: 00:06:56:19 Segment 2 Skin is shown in magnification, and the narrator explains that bacteria live on the skin. A cartoon of bacteria shows what happens when their environment is too sweet, salty, acidic or dry - these environments harm bacteria, so can be used in food preservation. The narrator says that now, bacteria are usually controlled with either cold or hot temperatures. A scientist is seen growing a bacteria culture in a laboratory. The same conditions the scientist creates are shown in a kitchen. A bowl of beef stock is left out on the counter overnight, and not put in the refrigerator. Three types of common food poisoning bacteria are discussed: salmonella, clostridium and staphylococcus. The contamination of salmonella bacteria is shown by following meat from the slaughterhouse to a butchers and then to a home. Prevention is demonstrated by putting the raw meat in the fridge. An animation shows an improperly defrosted turkey. The importance of washing hands is also discussed. Next, clostridium is looked at. It is shown how the bacteria are passed on and how they can harm humans. Prevention is also discussed. Time start: 00:06:56:19 Time end: 00:14:28:20 Length: 00:07:32:01 Segment 3 Staphylococci are discussed next. Humans carry this bacteria and can transfer it to food. Vulnerable foods are shown. A flow chart is used to show how cross-infection works. The importance of controlling bacteria by using cold or hot temperatures is reiterated. Newspaper headlines about food poisoning are shown. Ned Kingcott from the Department of Environmental Health describes three typical cases of food poisoning. The first, a salmonella case in a hotel due to improperly cooked and stored duck the second, a clostridium poisoning in a staff canteen due to improperly stored cooked meat the third, a staphylococcus case due to improperly stored mayonnaise. The narrator repeats the key methods of controlling bacterial food poisoning: storage, temperature and cleanliness. Time start: 00:14:28:20 Time end: 00:21:40:24 Length: 00:07:12:04

Further information: This video was made from material preserved by the BFI National Archive.