AIDS your choice for life 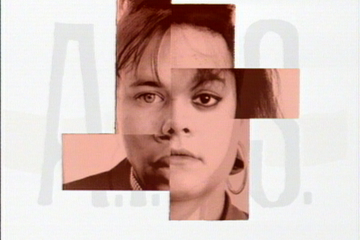 Summary: A film aimed at young people about HIV and AIDS presented by Mike Smith and Vicky Licorish. The presenters discuss aspects of HIV and AIDS, such as how it is contracted, what it does to the body and how to minimise risk of contraction. Three people who have AIDS or HIV are interviewed about how they contracted the virus and how it has affected them. They give advice to viewers about how to prevent infection. 3 segments.

Description: Segment 1 The narrator explalins that in the UK almost everyone who has AIDS is in one of the 'at risk' groups such as drug users and homosexuals. However, unless great care is taken, the infection will soon take hold in the general population. A male patient with AIDS, John, aged 22, is interviewed in hospital. He says to the viewers to be careful. The two presenters, Mike Smith and Vicky Licorish, are seen in the studio. They explain that although some people think they are not at risk of contracting HIV or AIDS, they could well be. Vicki explains about the immune system, how HIV attacks it, and how HIV progresses to AIDS. Dr Susie Forster is interviewed about how diagnosing people with HIV is difficult because for many years the virus may not affect them. Two people who are HIV positive talk about how they have not yet shown signs of illness. Dr Forster describes some serious illnesses that can arise from AIDS. John is seen again his symptoms are much more severe. He describes his skin cancer and other symptoms. Time start: 00:00:00:00 Time end: 00:07:21:22 Length: 00:07:21:22 Segment 2 An animation shows how the immune system protects against germs, and how antibodies fight germs. The animation shows what happens when the AIDS virus enters the body. Dr Forster talks about how difficult it is to treat illness in AIDS patients. A montage of different activities is shown, including kissing, dancing, sharing food - all with no risk of passing on AIDS. The presenters explain how the virus is transmitted - through blood and sexual fluids. They talk about the three main ways to contact the virus sexual intercourse, sharing needles or syringes, and from mother to baby. The risks of all three are discussed. The greatest danger is sex. Time start: 00:07:21:22 Time end: 00:15:14:03 Length: 00:07:52:06 Segment 3 The presenters explain how to minimise risk, having just one sexual partner for example. Condoms are also discussed. Mike Smith shows how to use a condom with his hand. An animation of an erect penis is shown, and a condom is put on. The presenters explain which sexual activities have risks attached, and which do not. The people who are HIV positive explain how having the virus has affected their lives and their sex lives, and give advice for the viewers. The viewers are also told that John died before the completion of the video. Time start: 00:15:14:03 Time end: 00:23:57:16 Length: 00:08:43:13

Credits: Directed by Caroline Godley and produced by Vic Lockwood and Alison Tucker.

Further information: This video was made from material preserved by the BFI National Archive