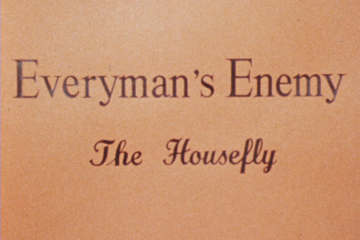 Summary: The life of the housefly is described, and its importance in the spread of disease, especially typhoid and dysentry. Control measures applicable to refuse sites, food processing factories and hospitals are discussed. 2 segments.

Description: Segment 1 A man is seen fishing by a river, using fishing flies as bait. The narrator says that although these flies are a benefit to the fisherman, to most people and animals, flies are a menace. A horse is seen shaking off flies. A rubbish heap and a domestic kitchen are shown, both crawling with flies. A butcher's and a canning factory are also shown, with the narrator explaining that flies are a hazard in all these environments. Four fly specimens are shown: house fly, lesser house fly, stable fly and greenbottle fly. Breeding grounds are shown: a refuse tip and a piggery. The life cycle of a fly is shown, from larvae hatching from eggs to the flies hatching from pupae. A refuse tip with many fly pupae is seen. Flies are shown walking on a window, and their foot pads are shown. A close-up of a fly's head is also shown. The narrator explains that flies are a potential carrier of disease. In a laboratory, a scientist lets a fly walk over a petri dish. The resulting bacteria are cultured, and a path is clearly seen. Examples of bacteria spread by flies are shown, including typhoid and dysentery. Control measures are discussed. A man sprays a rubbish tip with insecticide. Rubbish collectors are seen, along with examples of a good rubbish bin and an ineffectual rubbish bin. Time start: 00:00:00:00 Time end: 00:09:43:19 Length: 00:09:43:19 Segment 2 Rubbish is shown being collected from the street and taken to a refuse tip. The rubbish is pushed into place by a tractor and then sprayed with insecticide. The refuse is then crushed and covered with a tight layer of soil to prevent any flies hatching and emerging. Control measures to be used inside buildings are discussed. Various insecticide sprayers manufactured by Coopers are shown, from hand-held sprays to large ones that are wheeled around. The insecticide is safe to use around food, and is shown being sprayed in slaughterhouses, canneries, shops and catering establishments. The Cooper testing labs are shown. A small chamber is filled with flies and insecticides to test how well the spray works. A large test room is also shown. Aerosol is sprayed and then flies are released into the room. The flies are collected from the floor at the end of the test. Time start: 00:09:43:19 Time end: 00:18:54:12 Length: 00:09:10:18