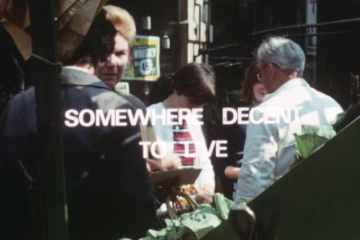 Summary: Documentary type account of the slums of London and the provision of new housing for Londoners. Looks at London's housing problem, the work of the Greater London Council since 1965 in slum clearance and building and its plans up to 1971.

Surveys opinions of tenants rehoused on GLC estates as to their new houses and surroundings, both inside and outside London. Gives an account of the transferring of old houses for new estates from the people who live in them and provides both sides of the debate about the new councils housing schemes. Made by Chess Valley Films.

Description: The film opens on the rooftop of a well-built up area. Then we see Westminster followed by London Bridge. Then we see a busy market street. title reads "somewhere decent to live".

A woman's feet in black heeled slingbacks walk down a cobbled pavement. A long row of Victorian terraced houses speed by. The woman's face can is seen and she wears a leather -style jacket and short curly hair, she looks up to the buildings and then down to the paper in her hands. We see another row of Victorian terraced houses. Then a grubby child eats an orange segment.

A baby cradled in its mother's arms is given a bottle of milk. Then we see the room the mother and baby are sat in, there is another child on the floor and a man at the stove. the room is very small.

A woman steps out a doorway and walks towards a mud pile where three children are playing, they wear red, yellow and purple clothes respectively. The woman picks up the child in yellow and walks back in the house. We see a view from above of a child walking into an outdoor toilet. In the inside of the house the walls are moldy and damp, wallpaper is peeling of it in some places. The woman carries a young girl into another room and changes her top. Looking out the window there is a pile of rubbish and peeling wallpaper under the window sill. The woman tucks her child into bed, there is a large patch of damp above the child's bed.

Children run around outside a row of Georgian style terraced houses, the buildings look unkempt and a little derelict. There is a row of white washing blowing in the breeze in a brick courtyard. We can see crumbling stone balconies, a busy street and an over grown garden. A woman walks out a front door. Now we see more terrace gardens and boarded up houses. Bricks are strewn across the street and one house is half torn down. An end of terrace house is pulled down by a construction vehicle as two men on the street look on. A yellow excavator can be seen throw an arch of rubble. More construction sites and derelict buildings are shown. then we see a new road full of traffic.

A toddler runs up to the railings of a balcony. More white washing blows in the wind. Children are playing in the street as a mint green van drives past.

A large green area with several high rise flats can be seen in the distance. Then a large new school building and a row of modern terrace buildings with well kept gardens.

Small bungalows are shown, then we see inside where an old lady polishing her trinkets. Then we see a younger woman cleaning her house. A colourful garden is being tended to by a third woman.

A red double-decker bus drives past a cluster of high rise flats. An old woman looks up at the top of one of the flats. A tall and angular high rise flat can be seen. Then we see a row of elegant terraced houses (possibly Eccleston Square), the street is lined with very clean cars, many of which are convertibles. Now we see a modern high rise flat still under construction, scaffolding is wrapped around the building. Then a canal lined with river boats. In a well kept interior of a house a woman walks in and begins to cook.

In a living room a mother picks up a newspaper as her daughter plays with a tea set.

Next we see a building site with a yellow and red excavator on it, rubble is piled up everywhere and there is a fire in the distance. A large fire burns. the fire is next to a small archway. Beams are dragged across a building site by a construction vehicle.

A modern row of terrace house has well kept gardens out front, a man can be seen mowing one of the lawns. See see another row of modern houses, this time all the front doors are bright orange.

A young boy plays with his father in the living room. The mother enters and offers the child some milk, he shakes his head in refusal. the father and son continue to play with the toy xylophone. the mother walks up the stairs of the house with folded towels in her hand. She walks past her son's room which has a sign on the door that reads "danger explosives keep out', then puts the towels on the bed in the adjacent room.

We see a colorful garden, then another high rise flat. An old lady in a floral dress reads a newspaper, behind her is a window with yellow curtains. Another woman picks up a cup of tea and carries it to the old lady.

Two boys play in their living room in front of an electric fire, mother comes in and picks up one of the boys. Now in the bathroom the two boys have a bath and continue to play with toys. A woman walks out of her bathroom, she is wearing a pink floral dressing gown. then she sits in front of a vanity mirror and brushes her hair. Then we see a quite street and the interior of a church.

A Judo class is taking place, a large crowd of children watch as their classmates take turns to knock each other to the mat. Children play in the street.

A woman pours water from a kettle into a teapot, then wheels her wheelchair into the living room where she is joined by a young girl and another woman.

A group of children hang their heads over a concrete balcony. A large group of children play in a courtyard with a large concrete structure. Three other children push a very large wooden toy train along the pavement. Then we see four children and one adult at a table together at a playgroup. A woman raises a flag on a flagpole, the flag is blue with a white daisy on it. Children play in a disused wooden boat. A tortoise crawls across a bit of grass. A young girl takes a picture of the tortoise and then pets it. Kids climb over a black car. Two children run towards a busy playground with a slide. A line of children run through a tunnel. A group of families with prams gather on a street side.

Inside an old peoples home, three men gather around a table and one smells a flower. Two women reading newspapers laugh amongst themselves. An old woman in her bedroom turns on the radio. A blue budgerigar in cage tweets. The woman comes into the room with a tray of tea.

Now we see cars in a car park, then a street lined with cars, then a row of garages. Two women walk into a small kitchen and speak to a young girl reading a book.

Back at the old peoples home a group of women play dominoes. They talk and laugh. A woman walks up a garden path and her friend greats her by inviting her to smell a flower. they laugh and go inside. Now we see more blocks of flats, then tenements and children playing. This is followed by more building sites of high-rises under construction.

The sea pas the shore. People on green park benches sit back and watch the water. We see rows of bungalows with gardens. Then we see a small busy street with a clock tower and markets. Then we see a selection of buildings and people from earlier in the film, the people are mostly laughing. Credit reads 'The End produced by Chess Valley Film". A slab of concrete is being lifted onto a building. The final image is of a high rise block of flats.

Further information: London Metropolitan Archives' holdings of this title may not be available to view; those available are accessed by appointment only. Please contact LMA for details.

In galleries: 50 Years of the London Boroughs