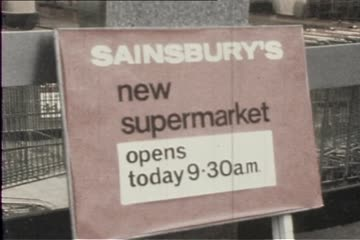 Summary: Film of the opening of a new Sainsbury’s supermarket at the Retail Park store in Leamington , 1971

Description: A title card reads: “Opening Day at Leamington Spa.” The narrator explains, “On November the 23rd last year we opened two new supermarkets. One in Worthing and one in Leamington, and we chose to film Leamington as being typical of a modern day supermarket and because it incorporates a number of new features, many of which you will probably not have seen before.” A sign outside the shop reads: “Sainsbury’s new supermarket opens today 9.30 a.m.” The first customers - three women with umbrellas, coats and headscarves - wait outside the door.

Inside the store 15,700 square feet of selling area, clean and well lit with modern furnishings. 23 checkouts, a bay of shopping trolleys and baskets, and rows of fully stocked aisles. Staff make the final preparations before opening, a woman in blue uniform polishes a shelf and adjusts price tags. The narrator reminds us, “It may give the impression of being very peaceful, but don’t be misled by appearances.” He goes on to list the shops many new amenities:

A new cigarette kiosk; ceiling lighting; Sainsbury’s first digital clock; a delicatessen counter filled with continental sausages and cut meats; produce tables with adjustable wire palettes; and a wine and spirits department with dividers between each commodity, Sainsbury’s 77th wine and spirits department. All the while men in suits and women in uniform continue to work away.

The narrator stops to make a further point about the lighting, explaining that, “The troughs across the ceiling conceal the ducting for the shop ventilation and heating system.”

In the final moments before opening managers check that all is ready and hold a short meeting. Outside the queue has stretched down the street despite the cold, grey weather. Men, women and children with coats, hats and umbrellas. “This is not, you will notice, the traditional Sainsbury’s opening weather.” A row of checkouts, with two women behind each desk – the two women at the front have clearly been asked to pose, one of them laughs as she looks directly into the camera.

A Mr. Dransfield opens the door to the first customers and the chairman, John Davan Sainsbury, greets them. A photographer captures the moment for the local paper. A man hands out baskets as the shop starts to fill up.

A clerk cuts sausages to replenish the delicatessen counter; a woman picks out ice-cream from the freezer drawer and the narrator highlights the new ‘home freezer packs’ of peas, beans, and mixed fish; metal baskets in the bread department, fitted with new descriptive tickets reading ‘long split tin’ and ‘bloomer’; an older woman wearing a headscarf browses the nylons, her bare legs met with a, “No comment,” from the narrator; a very busy produce section; a baby with a pink wool hat, sitting in a trolley; another particularly full trolley.

Motorised checkouts with ‘automatic change-makers’, illuminated checkout numbers, and microphones connected to the office. Behind each checkout is two women – one operating the till, the other bagging items.

“And now for a cup of coffee.” A large sign, with a plate and fork, for the in-store ‘Double Delight’ restaurant. The décor is distinctly 70s, described by the narrator as “Modern and very pleasing.” The 80 or so seats are all filled and waitresses bring tea, coffee and food to customers.

An array of prams outside the shop. A mother in a leather coat transfers items from a trolley to a pram, her baby still sat happily in the trolley. Another woman wheels away a trolley bag, with a Sainsbury’s bag perched on top. The narrator concludes, ‘And another new J.S. supermarket is launched.”

Further information: The Sainsbury store address was 19/21 The Parade