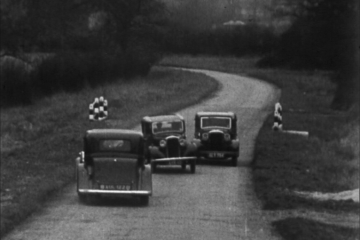 Summary: A road safety film by the Royal Society for the Prevention of Accidents (RoSPA). A series of incidents showing bad behaviour by motorists, cyclists, pedestrians and users of public transport are staged on real roads in urban and rural settings, in an attempt to promote better habits.

Description: RoSPA logo - a triangular warning sign in a circle, with their name in the border. Fades behind the film title; and then behind intertitles saying, in capitals, that nearly 20 people a day are killed on the roads, and that the following scenes are "an all too frequent occurrence". On the soundtrack, dramatic orchestral music plays.

Four small black saloon cars (various models - largely box saloons) drive abreast, spanning a new-looking, almost empty A-road (perhaps Edgware Way) in the countryside. Another small black box saloon (a Ford Anglia Eo4A 2-door saloon?) drives towards them on the left-hand side of the road, causing two of the cars to swerve in front of the others. The narrator says that selfish and stupid drivers are a danger to themselves and others. A very similar incident is later staged with three small black cars on a winding country road.

A luxury two-colour saloon car cuts a corner at a T-junction by a large country house, now suburban, which is "To be Let or Sold". It almost runs into a smaller black box saloon (perhaps a pre-war Morris Minor or Austin 7) coming the other way, which is forced onto the pavement.

Two small black cars approach a hump-backed bridge from opposite directions, both driving in the middle of the road, and then swerve to avoid a crash. The narrator says that this kind of behaviour is careless, as the view is obstructed.

Six young male cyclists ride abreast along an urban road, as a large pre-war black box saloon behind (perhaps a 15/6 Armstrong-Siddeley) attempts to pass them. The narrator says that they are disobeying the Highway Code, which only allows two to do so; and a car beeps.

A bicycle with two riders wavers around in a suburban road, as the narrator instructs us to "keep a straight course".

A fruit delivery boy (from a company based on the Broadway in Mill Hill) reads as he rides his cycle barrow behind a black box saloon car on Station Road, just off the Broadway. As he turns the corner into Brockenhurst Gardens, another partly-seen car narrowly misses him. "Do look where you are going!", the narrator admonishes.

A man jumps off the back of a 214 bus from Mill Hill to Hendon Central Station (with ads for Haig on the side), and into Station Road (I believe), just above Brockenhurst Gardens (or possibly at the bottom of Hale Lane on the other side of the railway bridge), as a car (probably a 12/6 Armstrong-Siddeley) passes him by. A different 214 bus - with ads for Presta Aerated Waters, Bisto and John Bull magazine - pulls towards the busy kerb of Mill Hill Broadway, as a man dashes across the road towards the other end of Brockenhurst Gardens. Another man gets off a bus and crosses the road in front of it (narratively the same bus, though it says 121 in the window and has a line along the side which is missing in the previous shot). We see the 214 from the back as he comes out into the road, and a light-coloured convertible car swerves to avoid him. The narrator says we often see these dangerous practices.

Two men come out of a shop - either the luggage shop "Damant" or the tobacconist next door - and walk straight into the road (perhaps still Mill Hill Broadway), where a large box saloon car (an Armstrong-Siddeley 15/6?) almost hits them. "Don't do it!" says the narrator.

Return to logo, which fades.

Further information: Cars in this film proved difficult to identify, as many standard models looked very similar at this time, and identifying badges are not clearly shown. Even the distinctive "luxury two-colour saloon" that cuts a corner was difficult to find. Paul Wood (see below) told me that it is a 3.5 litre Derby Bentley, modified by the film-makers in line with contemporary practice, to avoid it being recognised. Film companies, advertisers etc were concerned that car manufacturers might take them to court, if they considered that the film could give their product a bad image with the public. I do not have sufficient information or expertise to completely verify his identification (which seems likely to be correct), but I am certain that he has identified the source of the problem - the film-makers were deliberately seeking to avoid using recognisable models.

Images of Mill Hill and Edgware Way from: