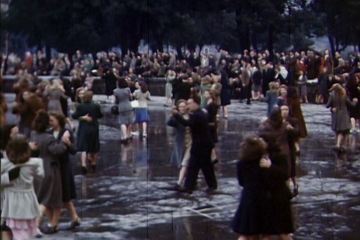 Summary: A documentary about London's parks.

Description: Two women visit the Chief officer of the London County Council Parks department in order to learn more about London's parks. He shows them a map of London's parks and open spaces and suggest that they investigate them, themselves. A montage of images from different parks across London shows their varied nature, with active boating lakes, open lawned spaces, and bright flower beds. The greenhouses at Finsbury Park show some of the behind the scenes work required to maintain a profusion of colour year round. Sporting facilities at some parks are indicated with a cycling competition, an open air boxing match and Gospel Oak lido. The County of London swimming championships at Parliament Hill make full use of the facilities. Elsewhere men test their strength in a tug-of-war contest and athletes compete in long jump, hurdles and running races. The Duke of Wellington, Lord Lieutenant of the County of London congratulates the winners and presents trophies. Across the city people engage in football, swimming, bowls, netball, tennis, and cricket in the parks. Some snow imported from Oslo, Norway in crates even allows a ski jump on Hampstead Heath. The scaffold structure sends the valiant competitors skyward, and they land in a pile of straw. Jan Dag Stoa, the mascot of the Oslo Ski Association polishes their skis. An astounded audience and BBC cameras look on. Public golf courses at Beckenham Place Park and Hainault Forest bring that game to the common public. The arts are presented in the parks through a number of open-air entertainments and exhibitions. A brass band plays for park goers on a bandstand by the Embankment. Some evening performances of 'Merrie England' are put on at Finsbury Park Open-air Theatre. Brockwell Park is the location for the 'Three Arts' ballet. Some children watch a Punch and Judy and marionettes show while others entertain themselves on playground slides and roundabouts. Parks staff are shown helping children use water fountains. Snow in a park creates opportunities for skiing, sledging and skating. The fair at Clapham Common brings fairground rides and amusements. Some brave souls take to dancing in the rain and roller-skating on a rink. The annual open-air exhibition of paintings at Victoria Embankment Gardens carries on through the rain. An exhibition of sculpture is put on at Battersea Park featuring work by Henry Moore. The documentary looks to the future of the city's parks, with comment on the green belt, London County Council's ownership of Hainault Forest and its plans to create new open spaces in London. Children playing on the rubble of a bomb site indicates the need. In his offices the Chief Parks Officer plans new parks on a map. Work is seen commencing on a new park space. The film ends with the message that the parks are 'Your Heritage'.

Further information: London Metropolitan Archives' holdings of this title may not be available to view; those available are accessed by appointment only. Please contact LMA for details.